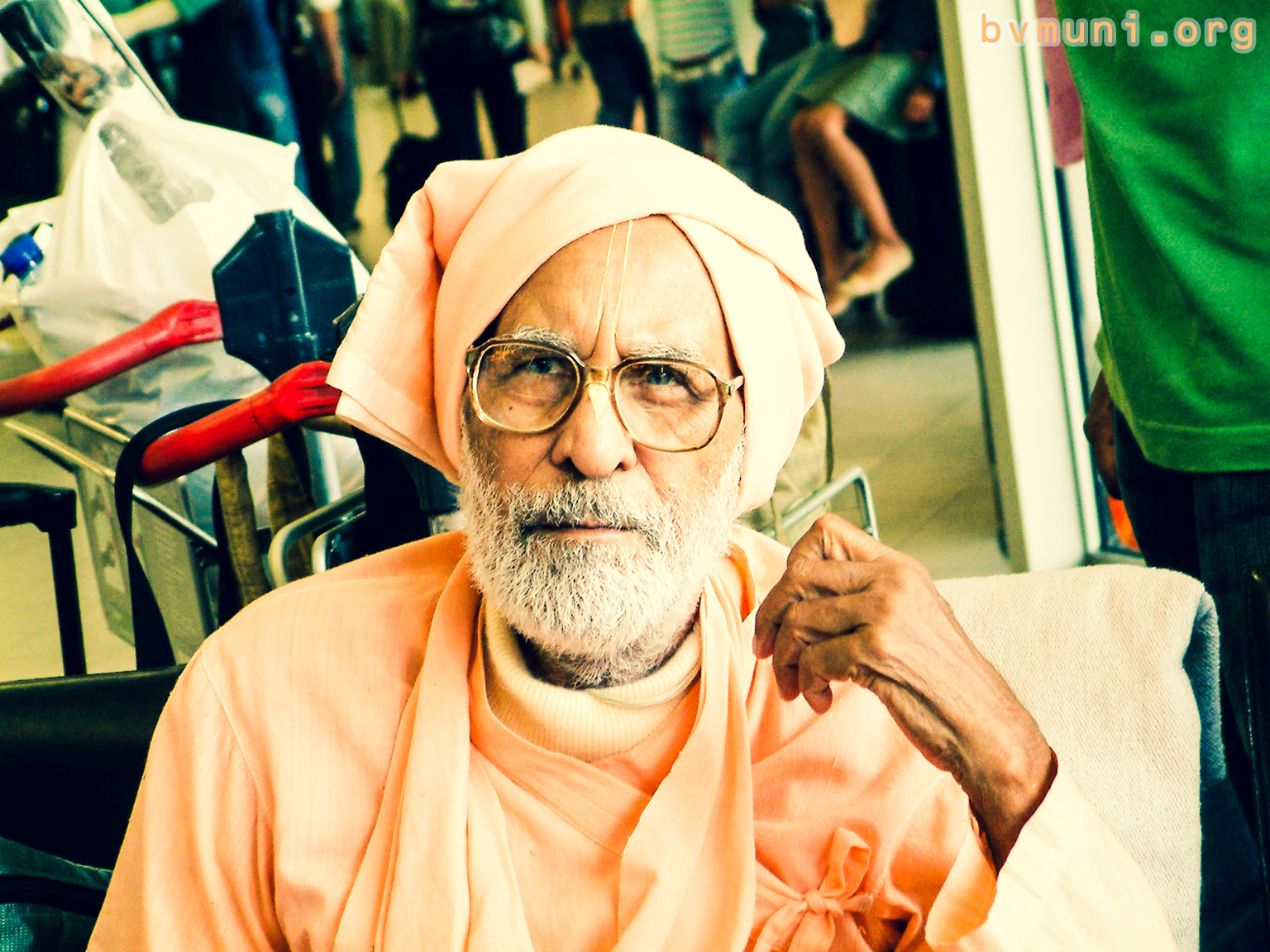 Srila Narayana Maharaja was born in a village named Tewaripur located near the bank of the sacred Ganges river in Bihar, India. The area was renowed for being the place where Lord Ramacandra and Visvamitra Muni came and killed the Taraka demon. He was born on the Amavasya (new moon) day 7th February, 1921, into a very religious Trivedi brahmana family. Throughout his childhood he had many opportunities to regularly accompany his father when he would go to attend Kirtana and pravachan assemblies.

In February of 1947 he had his first meeting with his Gurudeva in Sri Navadvipa Dhama, West Bengal. He had traveled there from his village after meeting a disciple of Srila Bhaktisiddhanta Sarasvati Thakura named Srila Narottamananda Brahmacari, who was touring and preaching the message of Sri Caitanyadeva in the area. After initial discussions with this devotee, he was convinced of the paramount position of the philosophy given by the acaryas in the line of Srila Rupa Gosvami Prabhupada, and within days he left home to join the mission of his spiritual master and surrender his life.

When he arrived in Sri Navadvipa Dhama, the annual parikrama was under way and he joined with the group. Upon its completion on Gaura-purnima, he was given both harinama and gayatri initiations by Srila Kesava Maharaja and received the name Sri Gaura Narayana. Very soon afterward, his Gurudeva also awarded him the title of Bhaktabandhava, which means “friend of the devotees,” because he was always serving all of the Vaisnavas in a very pleasing manner.

He traveled extensively along with Srila Kesava Maharaja in preaching tours throughout India over the next five years, and in 1952, on Gaura-purnima, his beloved Gurudeva awarded him initiation into the sacred order of sannyasa. In 1954 Srila Kesava Maharaja posted him in charge of the newly opened temple in Mathura named Sri Kesavaji Gaudiya Matha. Srila Narayana Maharaja began to spend part of the year in Mathura and the other part in Bengal, carrying on extensive services in both areas. This went on over the period of the next fourteen years. He was also appointed by Srila Kesava Maharaja as vice-president of his institution, the Sri Gaudiya Vedanta Samiti and Editor-in-Chief of its Hindi publications and the monthly magazine Sri Bhagavat Patrika. In 1968 Srila Kesava Maharaja passed from this world, and Srila Narayana Maharaja performed all the necessary ceremonial rituals for his samadhi burial.

During this time period, as a humble servitor of the Sri Gaudiya Vedanta Samiti Srila Narayana Maharaja began to organize the annual Karttika Vraja Mandala Parikrama, which he continues to carry on up to the present day.

Srila Narayana Maharaja was requested by his Gurudeva to translate the books of Srila Bhaktivinode Thakura from Bengali into his native language, Hindi. He has carried out this request by translating some of the Thakura’s most prominent books, such as Jaiva Dharma, Caitanya-siksamrta, Bhakti-tattva-viveka, Vaisnava-siddhanta-mala, to name only a few. All these books are also presently being translated into English by his followers. He also continues to lecture in Hindi, Bengali and English throughout India. All of his discourses are tape-recorded and are gradually being transcribed as well as translated into English for publication.

A significant relationship in the life of Srila Narayana Maharaja was his association with His Divine Grace Srila A.C. Bhaktivedanta Swami Maharaja Prabhupada, the world-famous preacher of Gaudiya Vaisnavism and Founder-Acarya of the International Society for Krsna Consciousness. They first met in Calcutta in 1948 on the occasion of the inauguration of a new branch of the Gaudiya Vedanta Samiti on Ghosh Para Lane, where they had both come to render their services. Their association continued a few years later when Srila Narayana Maharaja accompanied Srila Kesava Maharaja to Jhansi where Srila Bhaktivedanta Swami Maharaja had been attempting to start a Vaisnava society named The League of Devotees. A few years later in the early 50’s, Srila Bhaktivedanta Swami Maharaja came to reside at Mathura in Sri Kesavaji Gaudiya Math, by invitation of his godbrother, Srila Kesava Maharaja, where he stayed for some months. By having regular devotional exchanges with him and deep discussions of Vaisnava siddhanta, Srila Narayana Maharaja developed a very intimate relationship with him during this time period, regarding him both as his senior and superior, as well as his friend.

In 1959 Srila Kesava Gosvami Maharaja initiated him into the sacred sannyasa order, giving him the sannyasi name and title Sri Srimad Bhaktivedanta Swami Maharaja. The ceremony of Vedic fire yajna and all the rituals were performed by Srila Narayana Maharaja.

Srila Bhaktivedanta Swami Maharaja was already residing in Vrndavana during this period, first at the Vamsi Gopala Mandira and a few years later at the Sri Sri Radha Damodara Mandira. Srila Narayana Maharaja would often go there to visit with him. He would cook for him, honor the prasada with him, and have intimate discussions on Vaisnava philosophy.

For a period spanning almost two decades since his departure in November 1977, Srila Narayana Maharaja has unwaveringly been carrying out this final request by providing insightful guidance and loving shelter to all who come to him seeking such, and through the medium of his English books he is now giving his purifying association and divine realizations to sincere searchers of truth all over the globe.

For nearly half a century Srila Narayana Maharaja has demonstrated and exemplified the pure, unadulterated life of utter dedication and loving service to his Gurudeva, Sriman Mahaprabhu, and the Divine Couple, Yugala-kisora, Sri Sri Radha-Krsna. Srila Narayana Maharaja, as Their intimate servitor, continues to illuminate the path for those who wish to discover and dive deep into the ecstatic ocean of Radha-dasyam, service to the radiantly beautiful lotus feet of Sri Krsna’s dearly beloved, Srimati Radhika.

At the age of ninety years, on Decmeber 29, 2010, at 3:00 am, at Cakra Tirtha, Sri Jagannatha Puri-dhama, Srila Bhaktivedanta Narayana Gosvami Maharaja concluded his pastimes in this world.  That day was the sacred appearance day of his beloved Godbrother, nitya-lila pravista om visnupada Sri Srimand Bhaktivedanta Vamana Gosvami Maharaja.  The following day, in Sri Navadvipa-dhama, Sri Gaurasundara’s fully empowered emissary, the very embodiment of His unique compassion, was given samadhi.  He will never cease to reside in his divine instructions and in the hearts of those who are devoted to him. He used to say, “Do not think that I will ever leave you – never, ever, I am always with you.” 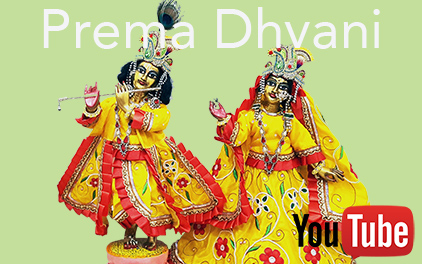 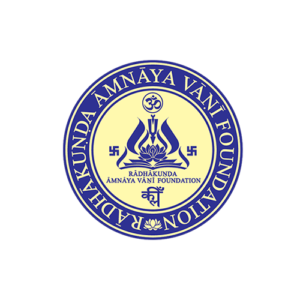